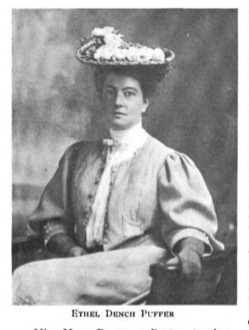 Ethel Dench Puffer, pictured here in 1909 in New England Magazine, was born in Framingham, Massachusetts in 1873 to George Dana Puffer and Ella (Dench) Puffer. She earned an A.B. from Smith College in 1891, then spent a year teaching high school in Keene, New Hampshire. In 1892, Puffer returned to Smith as an Assistant Instructor in Mathematics, leaving in 1895 when she won a fellowship from the Association of Collegiate Alumnae that allowed her to study as a graduate student in Germany. She returned to Massachusetts to finish her studies in psychology in 1897, receiving a doctoral certificate from Harvard the following year; the university did not recognize her qualification as a Radcliffe PhD until 1902, when Harvard began issuing graduate degrees to women.

Puffer embarked on an academic career, teaching Psychology at Simmons, Radcliffe, and Wellesley Colleges, sometimes concurrently, between 1902 and 1909. She wrote several influential texts on psychology and aesthetics during her teaching career, most notably The Psychology of Beauty (1905). As a women’s college alumna and faculty member, Puffer was also active in college suffrage organizing, serving as Executive Secretary of the National College Equal Suffrage League in 1914 and holding membership in the Association of College Alumnae, the College Club of Boston, and the New York City Woman’s University Club. During World War I, she also helped organize the Woman’s Land Army and its training school.

Puffer married engineer Benjamin Howes in 1908, and the couple split their time between Scarsdale, New York and Washington, D.C. They had two children, a son named Benjamin and a daughter named Ellen. After her marriage, Howes found academic work largely barred to her, as many colleges hired only unmarried women as instructors. She dedicated herself to researching married women’s opportunities to combine family and professional life, advocating for women’s cooperative home service clubs and part-time work for mothers in articles for the Woman’s Home Companion and the Atlantic Monthly.

By the 1920s, Howes had returned to Smith, this time as the founder and director of the college’s Institute for the Coordination of Women’s Interests, funded by a three-year grant from the Laura Spelman Rockefeller Foundation. Howes’s Institute conducted historical and sociological research in an effort to make household management more efficient for women so they could pursue education and intellectual interests in addition to family life. By the late 1920s, however, interest in Howes’s brand of domestic reform had begun to wane, and the Institute closed in 1931 after Howes was unable to secure funding for further research.

Still, Howes remained involved in domestic reform and other political efforts for the rest of her life. In 1931, President Hoover invited her to serve on a Committee for Household Management at a national Conference on Home Building and Home Ownership. During her time in Washington, D.C., she was also an active member of the League of Women Voters and served on its Committee on Economic Affairs and Postwar Planning between 1943 and 1946.

Howes died in Hartford, Connecticut in October 1950, at the home of her son.