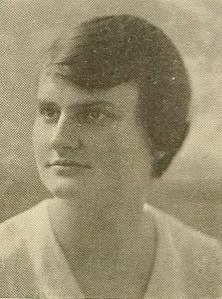 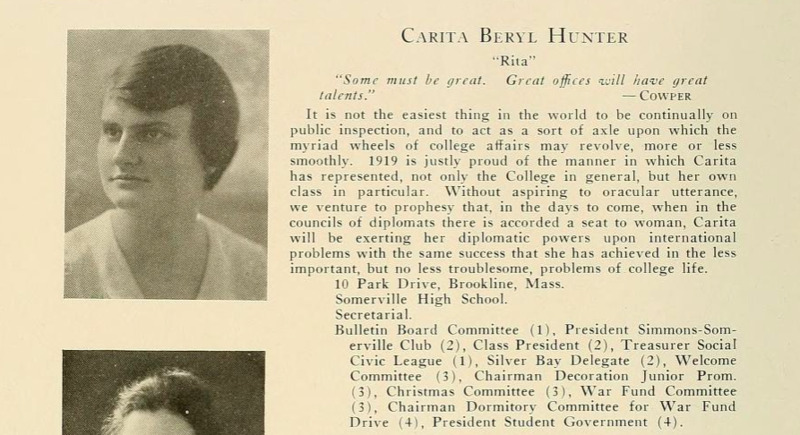 Carita Beryl Hunter was born in Nova Scotia and immigrated to Massachusetts as a young child. She attended Somerville High School, graduating in 1915, and went on to pursue Secretarial Studies at Simmons. In her first year, Hunter served as Treasurer of the Social and Civics League, developing an interest in political work, perhaps including suffrage activism. The following year, she was elected Class President, and she later served as President of Student Government. During her junior year, Hunter organized a student government mass meeting to discuss plans for helping the war effort, and she took charge of the College’s War Fund Committee. When she graduated in 1919, her classmates remembered her for her political activism, writing in her senior yearbook entry that, “we venture to prophesy that, in the days to come, when in the councils of diplomats there is accorded a seat to woman, Carita will be exerting her diplomatic powers upon international problems with the same success that she has achieved in the less important, but no less troublesome, problems of college life.”

After graduation, Hunter taught Secretarial Studies for a year at Centenary Collegiate Institute in Hackettstown, New Jersey. In 1921, she returned to Simmons as an instructor in Secretarial Studies, a position she held for the next five years. Later in her life, she taught at Tufts University and held membership in the American Association of University Professors.

In 1926, Hunter married Victor C. Lovejoy, and the couple had two children, Gail and David. The family made their home in Melrose, Massachusetts, where Carita became a member of the local school committee in the 1940s. She always maintained a close connection to Simmons, serving as President of the Alumnae Association in the late 1920s and remaining involved with the group for the rest of her life.

Hunter died in Melrose in July of 1987. Her Boston Globe obituary asked friends and family to make gifts to the Simmons College Alumnae Fund in her memory.