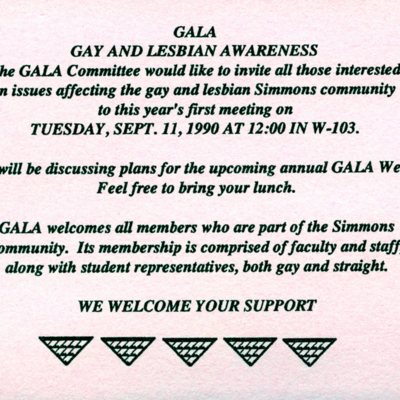 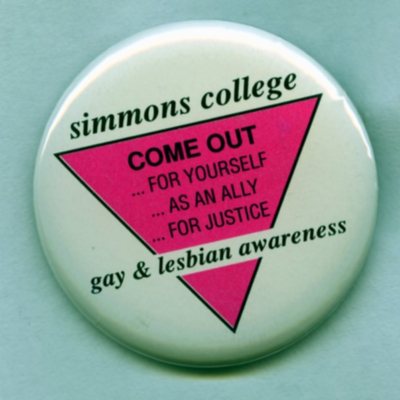 The Lesbian Support Group was established in 1977 to create a support network for lesbian women at Simmons College, with a secondary aim at educating the Simmons community about gay issues. In, 1986, the Gay and Lesbian Awareness organization (GALA) was founded. GALA was run by students of all sexual orientations with the goal of promoting awareness of and tolerance for the gay, lesbian, and bisexual community at Simmons College. In 1992, GALA hosted a teleconference called “Understanding and Meeting the Needs of Gay, Lesbian, and Bisexual Students” that was broadcast nationally by the National Association of Student Personnel Administrators. They also campaigned on campus that year for equal tuition benefits for same-sex partners, which successfully went into place in 1993. GALA celebrated their 10-year anniversary in 1996.

Controversial flyer created by the LBA, 1990. 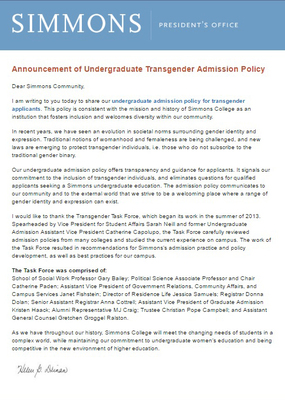 In 1996, the Simmons College Safe Zone program was developed in collaboration with GALA and the Lesbian Bisexual Organization (LBA). The program encouraged all students, staff, and faculty to attend the Safe Zone workshop to become allies to the gay, lesbian, and bisexual communities at Simmons.

On November 5, 2014, Simmons College also announced a new undergraduate admission policy regarding transgender applicants. Under the policy, Simmons accepts students born female, regardless of current gender identity, and those born male who now identity as female. Though the policy received some criticism for not addressing those who are born as either male or female but identify as neither gender, with this policy Simmons College became the third women’s college in the United States, after Mills College and Mount Holyoake College, to create a more inclusive transgender admissions policy.