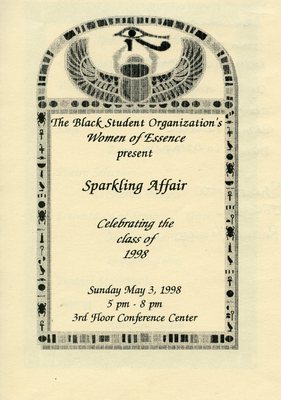 Over the decades, the Black Student Organization has undergone many changes. Following the response of the Ten Demands by the Administration, the Black Student Organization turned their attention to community building at Simmons. During the 1970s, the BSO was instrumental in developing an Office of Supportive Instructional Services, which offered tutoring support on campus. During this period, the BSO also concentrated on the social and cultural aspects of heritage. They sponsored Kwanzaa celebrations, the annual Black cultural weekend, a speaker series, fashion shows, musical programs, and art exhibits highlighting work of faculty. It was also during this time that the annual “Sparkling Affair” gala began.

Our Little Black Book, a yearbook for Black students, was first published in 1974 to capture the service, time, and growth of the Black experience at Simmons. Originally D. Lynne White’s 1974 senior project in Communications, the book was not meant to be a counterpart to Microcosm, but instead to provide a more meaningful and memorable chronicle of Simmons College’s Black community. Beyond documenting the experience of Black students at Simmons, Our Little Black Book also aimed to establish a tradition for future Black students to follow and improve upon year after year. 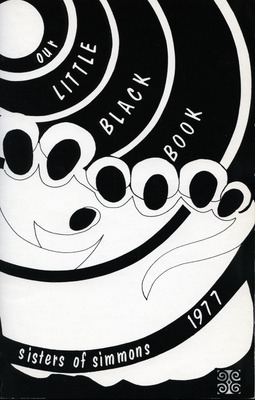 The Black student newsletter, Vantage Point, also functioned as a community-building publication, allowing Black students interested in journalism the opportunity to write about issues concerning their community and to offer fresh perspectives on news stories.

It was also during this time that the Black Student Organization changed rules regarding membership. Beginning in 1979, the BSO changed their name to the Black-Hispanic Organization (BHO), whose purpose was to “promote interest and pride in the aspirations and accomplishments of black and Hispanic people.” The joint organization existed until 1989, when a student group for Simmons’ Latina women, the Latin American and Spanish Speaking Organization (LASSO), formed. Though the BSO reverted to their initial purpose—specifically supporting Black students—they collaborated with the Caribbean Cultural Association, formed in 1998, the Asian Students Association (ASA), LASSO, and other student groups to sponsor events and lectures.

Born in 1955, Gwen Ifill graduated from Simmons College with a degree in communications in 1977. During her time at Simmons, she was involved in the Simmons Chorale and acted as editor for Vantage Point. Following her graduation, she went to work at the Boston Herald-American as a reporter. Interested in politics, she took a position in Baltimore for the Evening Sun, where she hosted her first news show for a local television station. Ifill later took posts reporting for The Washington Post and The New York Times before becoming a congressional correspondent for NBC News in 1994. In 1999, PBS hired Ifill, where she worked on both NewsHour with Jim Lehrer and Washington Week. In 2004, Ifill became the first American-American women to moderate a Vice Presidential Debate, moderating a second in 2008. Her book Breakthrough: Politics and Race in the Age of Obama was published in 2009. In 2013, Ifill and Judy Woodruff became the co-anchors of NewsHour, becoming the first female team to anchor a network news program. She passed away in 2016.